Lincoln Children's Museum invites children to create, discover and learn through the power of play. 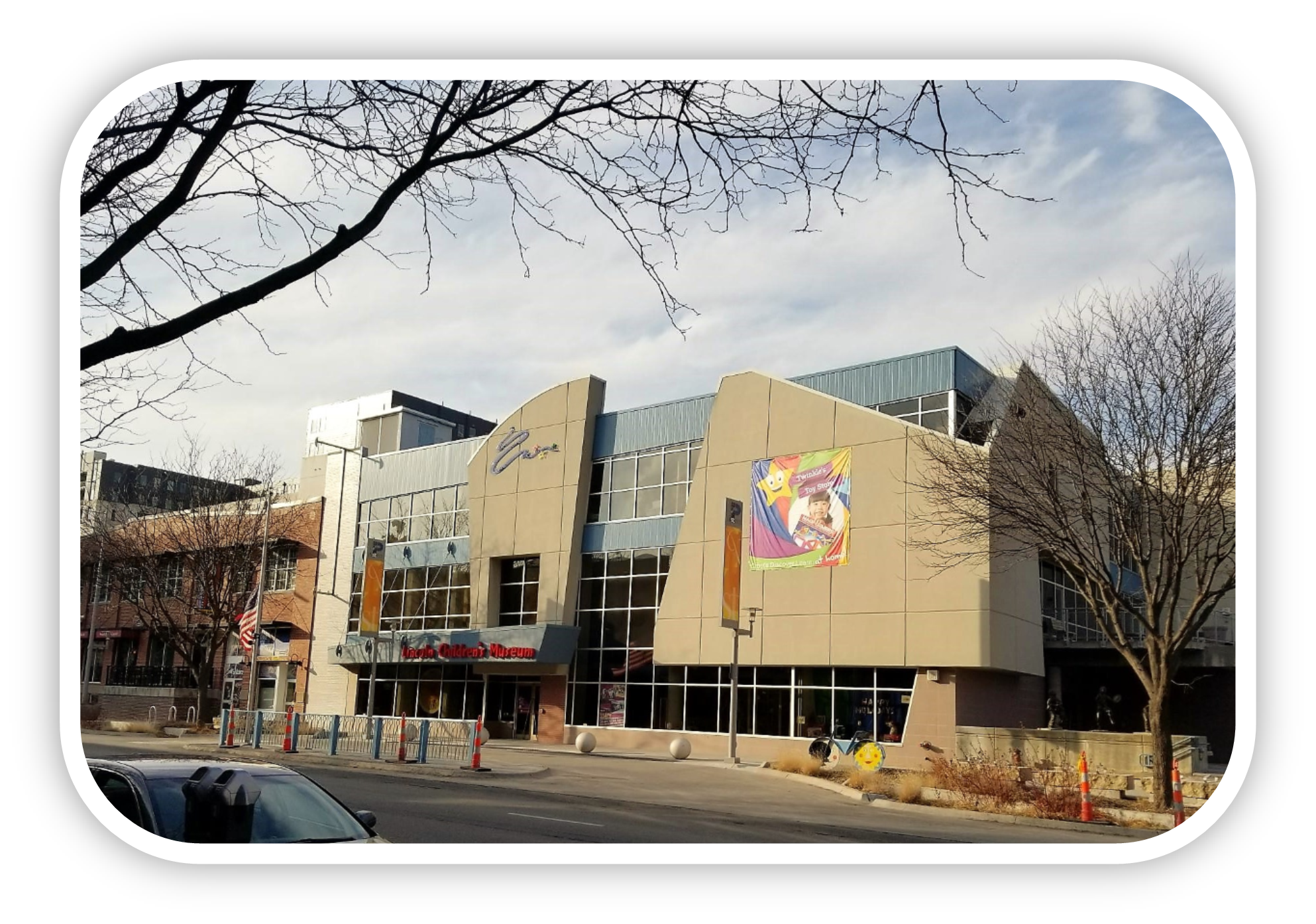 Build, dance, play, climb, create, sing, and laugh at the Lincoln Children's Museum in Lincoln, Nebraska. Here you can be whatever and go wherever your imagination takes you! The Lincoln Children's Museum offers three floors and 23,300 square feet of hands-on exhibits and imaginative programs that allow children and adults to discover the adventure of learning through play together.

Play is every child’s most important job. It is how they learn to work with other people and to engage their sense of creativity. With your support, we can contribute to building a stronger community by providing opportunities to children to experience the power of play, and in turn, discover something new about themselves and the world in which they live.

Lincoln Children's Museum is a private non-profit, 501(c)(3), that receives no city, state or federal tax dollars. The Museum's Board of Directors sets policies and oversees operations.

The Lincoln Children's Museum was created by a group of active, committed parents and educators who had visions of Nebraska children learning through exploration and discovery. After incorporating in 1987, the founders introduced the concept of a hands-on learning museum in August, 1988 at a 10-day "Sights and Sounds" exhibit at the state fairgrounds which attracted 10,000 children and adults.

With start-up grants from three local foundations, the permanent Museum opened on December 2, 1989. A dozen simple, handcrafted exhibits filled 7,500 square feet of leased space in the Atrium in downtown Lincoln, and 15,000 visitors came in the first year. From that grassroots start, the Museum's attendance and support grew steadily. The community replaced the early exhibits, one by one, and added better, more sophisticated ones.

In 1991 the Museum moved to its next location, occupying 15,000 square feet of a former downtown department store, 13th & O Streets. Annually, up to 80,000 people visited an often-full Museum. The Museum was now poised to take its services and exhibits to a new level in a new facility. In a short time, the Museum became a true community endeavor. The Lincoln Fire Department installed a cab from a retired fire engine where children role played as firefighters with real coats, helmets and hoses. The Lincoln Center Kiwanis Club and Junior League built a Lunar Lander where children became astronauts. Hy-Vee installed a child-size grocery store, with food, shopping carts, a scanner and cash register. The University of Nebraska Athletic Department helped build a room-sized football stadium that included the sounds of a cheering crowd, goal posts, and tests of skill.

In 1998, at the Museum's initiative, the City of Lincoln agreed to a partnership with the Museum contingent on passage of a city bond issue and successful private capital fund drive. In May, 1998, responding to an active campaign by the Museum, Lincoln voters solidly endorsed a new Lincoln Children's Museum and approved a $1.9 million city bond issue to help buy and renovate the new site. The Museum organized and managed a public capital campaign and successfully raised an additional $4.1 million to complete the new $6 million Museum. In this partnership, the city owns the 72,000 square foot building, which was totally renovated at the Museum's expense and leased to the Museum for a nominal fee. The Museum occupies 45,500 square feet and uses the remaining space for educational programming.

If you would like to inquire more about our mission and history you may send us an email here.

This User Agreement (“Agreement”) sets forth the obligations relating to your use of the website www.lincolnchildrensmuseum.org (the “Site”), which is owned and operated by the Lincoln Children’s Musuem (the “Company”). Please read this Agreement carefully before using the Site. Your use of the Site is expressly conditioned on your acceptance of this Agreement. Do not use this site if you do not fully agree with the terms and conditions set forth herein. If you have any questions about this Agreement, please email info@ lincolnchildrensmuseum.org.


1. Use of Site. You shall use the Site only for legitimate purposes as the Site is intended to be used. You shall provide only truthful and accurate information to the Site and you are prohibited from transmitting or uploading any information that contains a virus, bug, or other harmful item. You will not violate any copyright or other law with respect to your use of the Site. You will not take any action that will interfere with the proper working of the Site or, in the Company’s sole discretion, impose an unreasonably large of disproportionate load on the Site’s infrastructure.


4. Intellectual Property Rights. All right, title, and interest in and to the Site, together with its content, codes, sequences, derivative works, organization and structure, any documentation, data, or other related materials (collectively, the “IP”), is, and at all times shall remain, the sole and exclusive property of the Company and/or any third parties from which the Company has licensed portions of the IP, if any. The IP contains trade secrets and proprietary information owned by the Company and is protected by United States copyright laws (and other laws relating to intellectual property). You must treat the IP like any other copyrighted material and you may not copy or distribute the IP, electronically or otherwise, for any purpose without the express written permission of the Company.


6. Limitation of Liability. The Site and/or the Company assumes no responsibility and shall not be liable for any damages that occurred based on your access to or use of the Site, including but not limited to (i) damages to your computer equipment or other property that may result from viruses, bugs, or any cause; and (ii) any and all losses, injuries, or claims of any kind resulting directly or indirectly from your use of the Site. THE COMPANY DISCLAIMS ANY AND ALL OTHER WARRANTIES, EXPRESS OR IMPLIED, INCLUDING WITHOUT LIMITATION ANY IMPLIED WARRANTIES OF MERCHANTABLITY OR FITNESS FOR A PARTICULAR PURPOSE.


You accept sole and complete responsibility for: (a) the selection of the Site to achieve your intended results; (b) your use of the Site; (c) the results obtained from the Site; (d) your selection, use, download, or review of any third party User Content; (e) the terms and conditions of any transaction with any other user through the Site; and (f) the quality and condition of any products you purchase or obtain from any other user through the Site. You shall not assert any claims against the Company based upon theories of negligence, gross negligence, strict liability, fraud, or misrepresentation. TO THE MAXIMUM EXTENT PERMITTED BY APPLICABLE LAW, IN NO EVENT SHALL THE COMPANY BE LIABLE FOR ANY SPECIAL, INCIDENTAL, INDIRECT, CONSEQUENTIAL, PUNITIVE, EXEMPLARY OR DAMAGES WHATSOEVER (INCLUDING, WITHOUT LIMITATION, DAMAGES FOR LOSS OF BUSINESS PROFITS, BUSINESS INTERRUPTION, LOSS OF BUSINESS INFORMATION, OR ANY OTHER PECUNIARY LOSS) ARISING OUT OF THE USE OF OR INABILITY TO USE THE SITE, OR THE ACTIONS OR CONDUCT OF ANY USERS OF THE SITE, WHETHER BASED UPON CONTRACT, WARRANTY, TORT, NEGLIGENCE, STRICT LIABILITY OR OTHERWISE. ADDITIONALLY, IN NO CASE WHATSOEVER SHALL THE COMPANY’S TOTAL LIABILITY TO YOU FOR ALL DAMAGES EXCEED FIFTY AND NO/100 DOLLARS ($50.00).


7. Indemnification. To the maximum extent allowed by law, you shall defend and indemnify the Company and its members, managers, agents, representatives and affiliates from and against any claim, loss, cause of action or demand, including attorney’s fees, brought against the Company and/or the Site by any third party as a result of your use of the Site or any actions by you or your employees, agents, or representatives.


8. Applicable Law. The laws of the State of Nebraska, without reference to Nebraska’s conflict of law principals, shall govern this Agreement and all of the transactions contemplated by it, as well as all matters arising out of or relating to it, including without limitation claims as to its validity, interpretation, construction, performance, and all claims sounding in tort. Any legal action or proceeding with respect to this Agreement or any document related hereto shall be brought only in the circuit courts of Nebraska, or the United States District Court for the District of Nebraska, and, by execution and delivery of this Agreement, each party hereto hereby accepts for itself and in respect of its property, generally and unconditionally, the jurisdiction of the aforesaid courts. The Parties hereby irrevocably waive any objection, including, without limitation, any forum non conveniens, which any of them may now or hereafter have to the bringing of such action or proceeding in such respective jurisdictions.


9. Modification of Terms of Use. The Site and/or the Company reserve the right to modify this Agreement at any time. Any modifications made will be posted on the Site. Please review this Agreement frequently. This Agreement was lasted updated on November 9th, 2016.